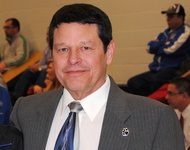 Jack E. Yaple, 62, of Millcreek, lost his match in final overtime on Monday April 29, 2013 following a brief illness. A resident of the Erie area all of his life he was born in Erie on February 10, 1951 a son of the late Robert H. and Lavon Alloway Yaple.
Jack graduated from Wattsburg Area High School and went on to serve in the United States Army during the Vietnam War. He worked as an operating engineer with Local 66 for over 35 years before retiring in 2011. Jack founded the Wattsburg Wrestling Club in 1981 and became the head wrestling coach for Seneca High School in 1989 where he was a two-time District Coach of the Year in 1997 and 2013. He loved his family and enjoyed golfing, movies, and scuba diving.
Survivors include his wife, Judy Bender Yaple, whom he married in 2010 and gave him many happy years; four daughters, Tammi Esser and her husband Michael of Union City, Misty Yaple of Wattsburg, Nikki Miller and her husband Shawn of Erie, and Kim Paris and her husband Josh of Erie; one son, Rusty Yaple and his wife Heather of Erie; one brother, James W. Yaple and his wife Midori of Maui; nine grandchildren, Rachelle, Cyle, Elena, Payge, Brynn, Audra, Ryan, Wesley, and Olivia; and many nieces and nephews, including Wendy and Crystal.
Friends may call at the Russell C. Schmidt & Son Funeral Home Inc., 5000 Wattsburg Road, on Wednesday from 5 to 9 p.m. and Thursday from 2 to 7 p.m.. A funeral service will be held at South Harborcreek United Methodist Church on Friday morning at 10:00 a.m. and burial will follow in Waterford Cemetery.
In lieu of flowers memorial contributions can be made to the Wattsburg Wrestling Club, 3381 Hartman Rd., Erie, 16510.


To send flowers to the family or plant a tree in memory of Jack E. Yaple, please visit our Heartfelt Sympathies Store.